[Argad] A game for two pirates

[Argad] A game for two pirates

On Sunday 16th February at "Ramène tes Jeux" games festival in Theix-Noyalo / Teiz-Noaloù (Brittany) I had planned a pirate game. We had a large gaming surface available (one 4m x 2m table and one 3m x 2m table) because we had it the previous day for a medieval arthurian game, but on Sunday I (the GM) had only 2 players pre-registered. ...No problem, I made a simple scenario for them.

A small village in the western part of St-Domingue (French since 1697 only a few years ago). At the beginning of the game the bastion appears empty because the pirates (players) do not know if there still is a garrison or not in there. 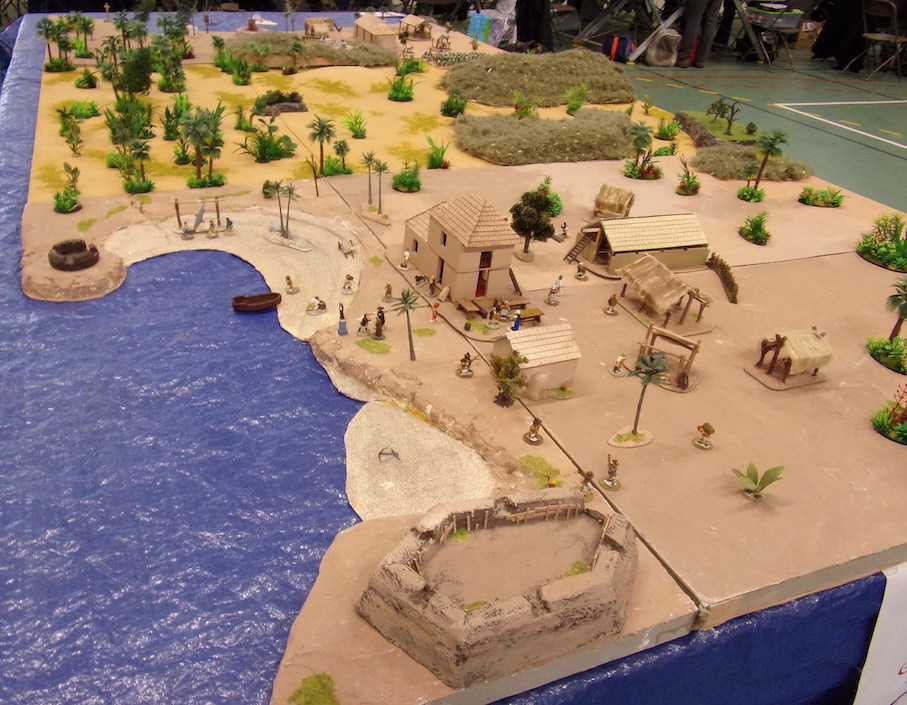 Near another bay, a plantation with agricultural activities (you can't have pirates only in a pirate world! ...someone has to produce wealth, otherwise it would not work)... 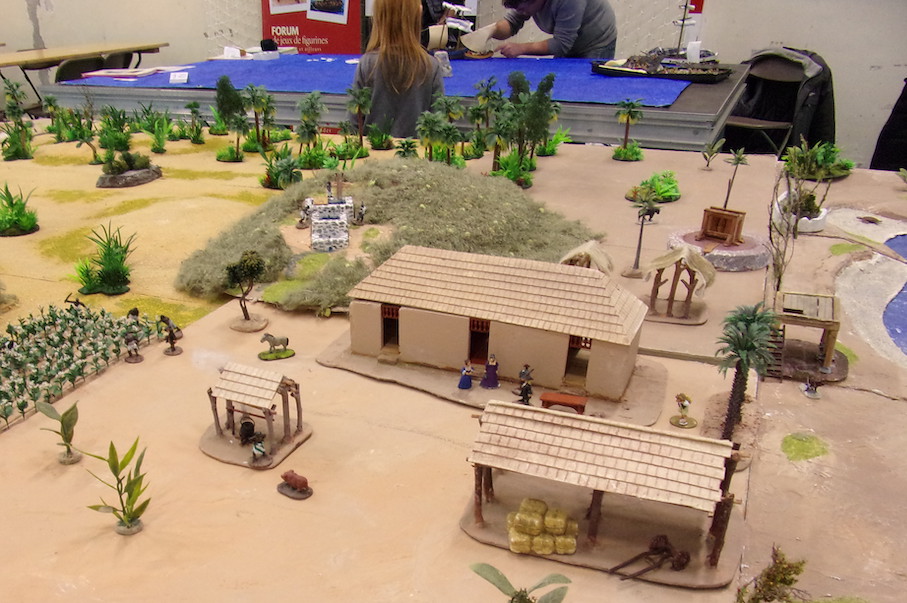 But... what's happening far from there, on the vast seas? 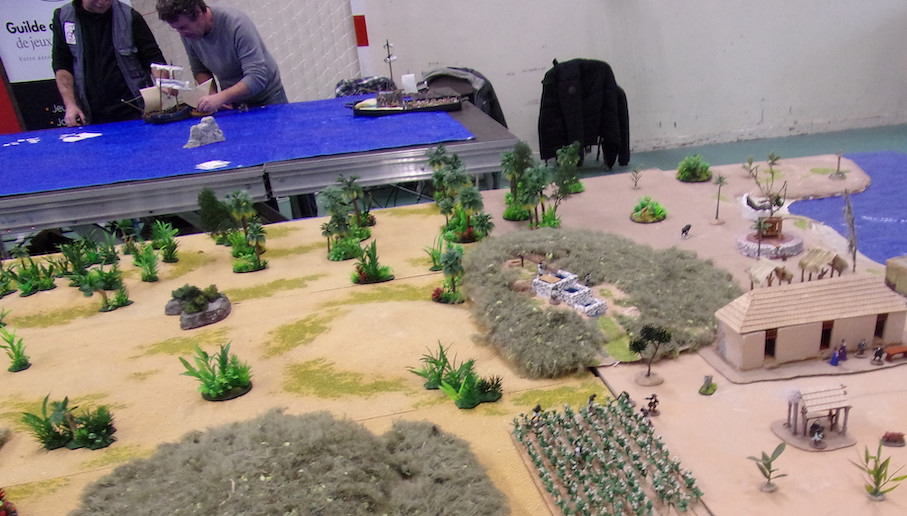 The previous day (in the written scenario) three small pirates ships had taken a Spanish merchant ship. There was some booty but the most valuable were the niece of the governor of Cuba (certainly worth a high ransom) and an iron chest that they could not open. Before his death the Spanish captain swore that it was gems from Peru sent to the King of Spain and "No no NO no I don't have the key Ayayayay!"

They drank a lot during the night. In the morning (when the game begins) two of the pirate captains (the players) see that the ship of the third one (NPC) is gone. The iron chest and the governor's niece are gone too! They know that the ship had been damaged and could probably not sail very far. 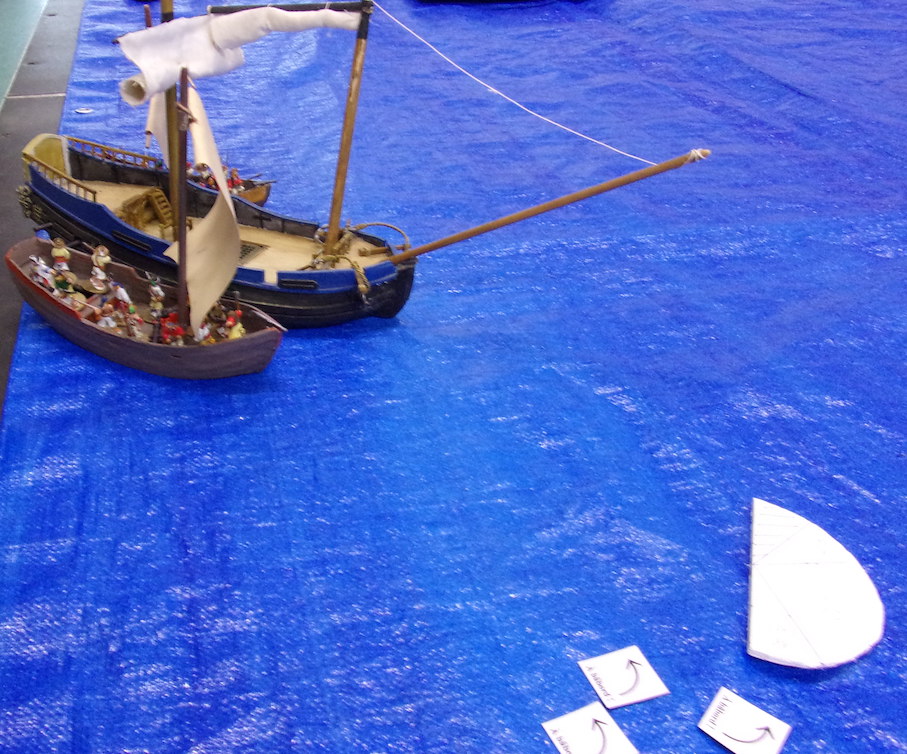 They decide to sail towards the less inhabited bay of the area ...and there they find the traitor's ship aground near the coast. Nobody aboard, only a drowned sailor lying on the sand. 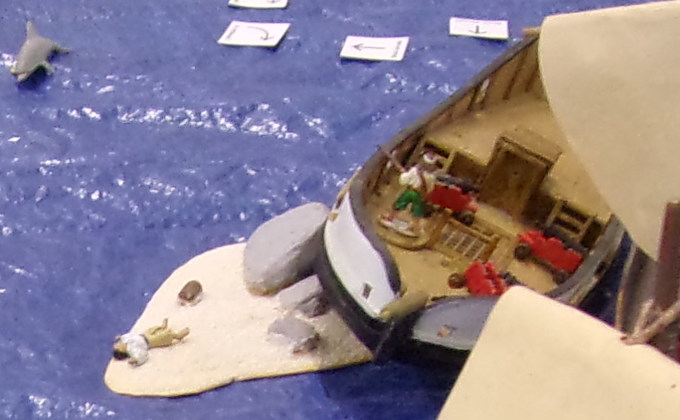 They don't hesitate and they come ashore as fast as possible, near the plantation (Um, I thought they would send some spies first, it would have taken more time... but these players are too bold). 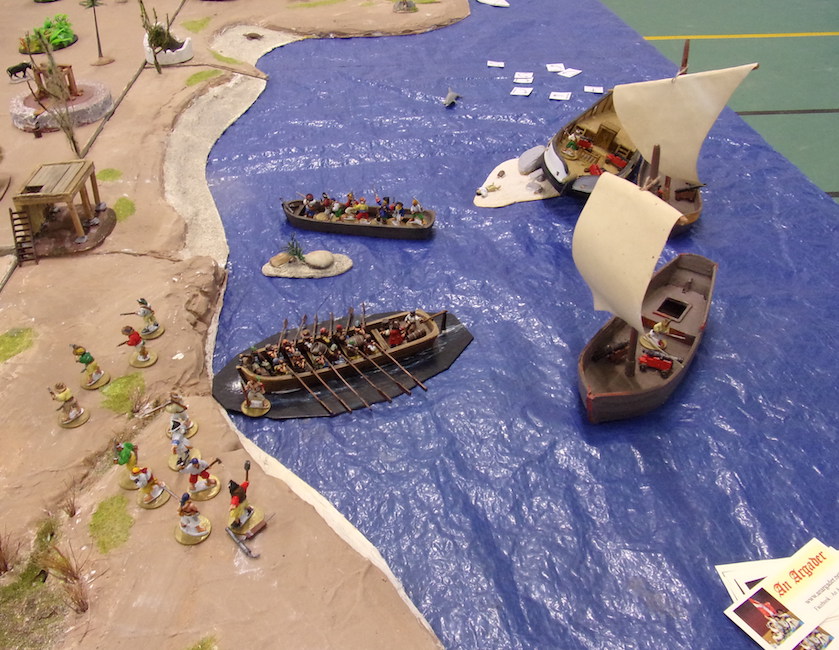 The plantation owners see them coming, they don't know who it is so they run away with their servants and most of their workers.

Three men have been left near the indigo vats (right of picture). They are soon recruited by one of the pirates captains, who offers them better professional prospects. 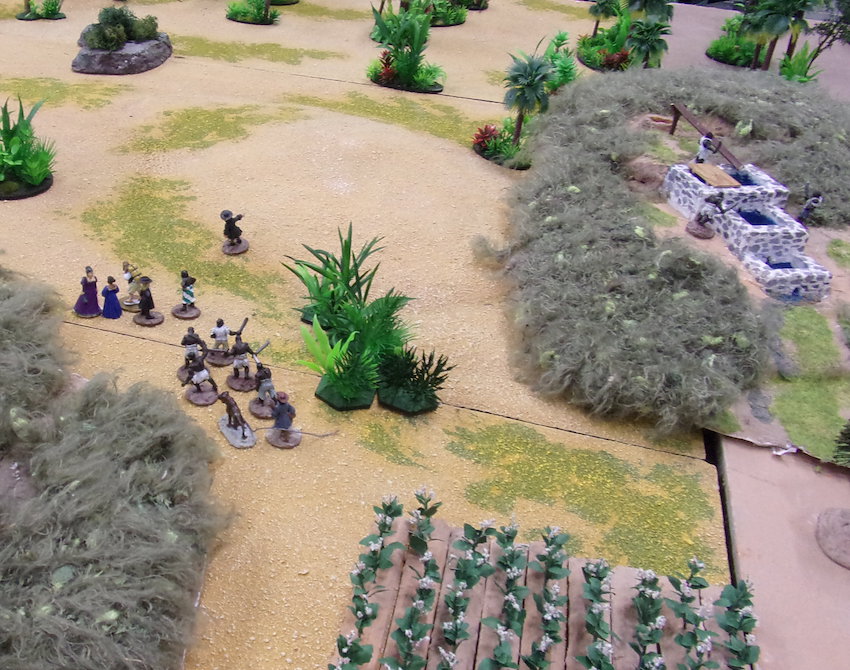 The two pirates and their crews search the countryside in all directions.

After some time, one of them discovers a house hidden in a small valley... he sends his men near... some people inside the house shoot at them! The third pirate is hiding in there with what's left of his crew!

Shootings from both sides... pirates killed on both sides... After some casualties the first pirate understands that he will not succeed alone. The second pirate has heard the shots, and comes to his help (...and wants to make sure he will get his share).

They decide to collect branches and dry grass and to light a fire around the wooden house so their enemies will be smoked and forced to come out. 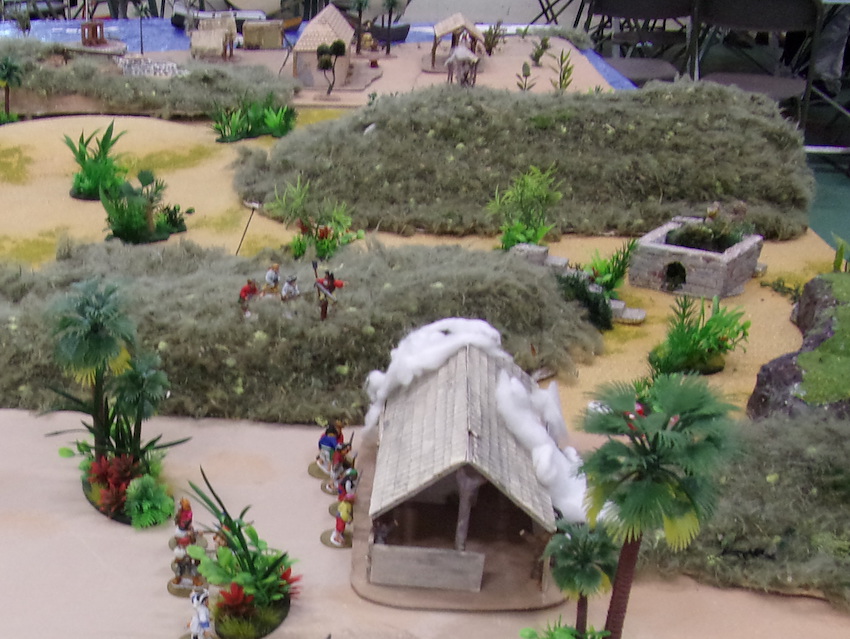 The plantation owners and the sound of the shootings have alerted the village. There is a very small military garrison there, and also some locals are former privateers who know how to fight if they need to defend their home. But the garrison officer understands that perhaps the pirates do not want to attack the village so he hesitates to interfere. 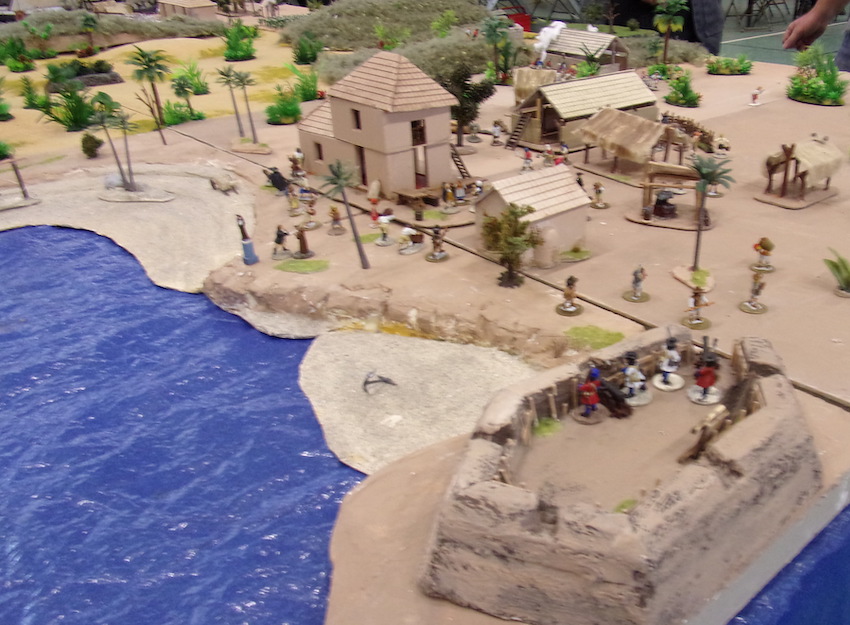 The pirate traitor tries to negociate with the two pirates and says he will give the hostage and the iron chest if they let him go away with his men and other belongings.
They say OK, send the chest and the girl.
When they have them, they continue to wait, and when their rival comes out running with the three remaining men of his crew they all shoot.
One of the men escapes, the captain and the others are hit and fall. The captain is wounded but still alive ...the two pirates kill him and are happy to stand on his body. 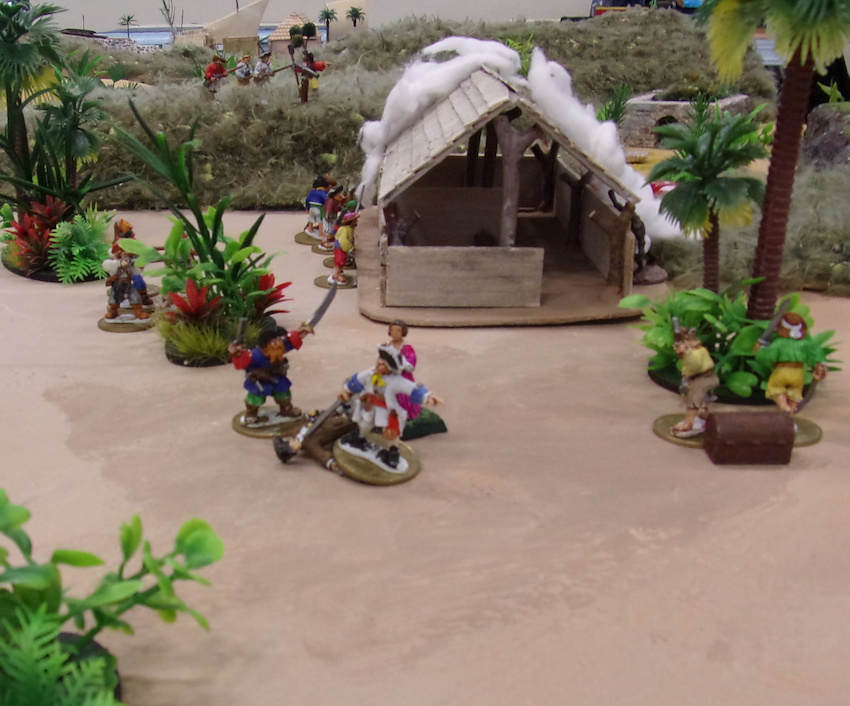 Then they think it would be a good idea to return to their ships as fast as possible. 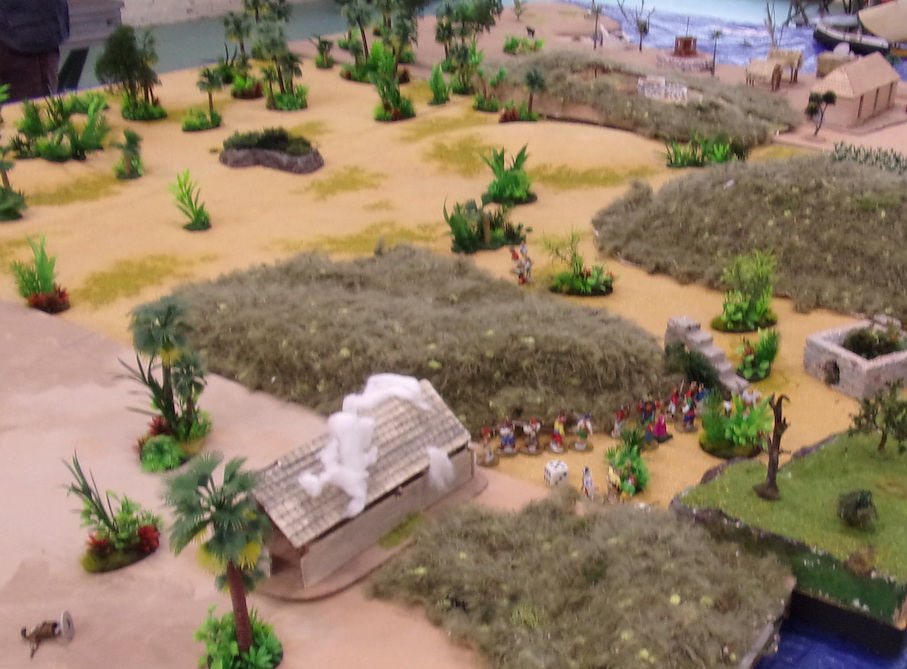 It was a good idea indeed: now they hear cannon fire near the village. It's a Spanish ship asking for revenge. The Spanish fire a few cannonballs on the bastion to be well understood, then an officer comes to the village on a shallop. 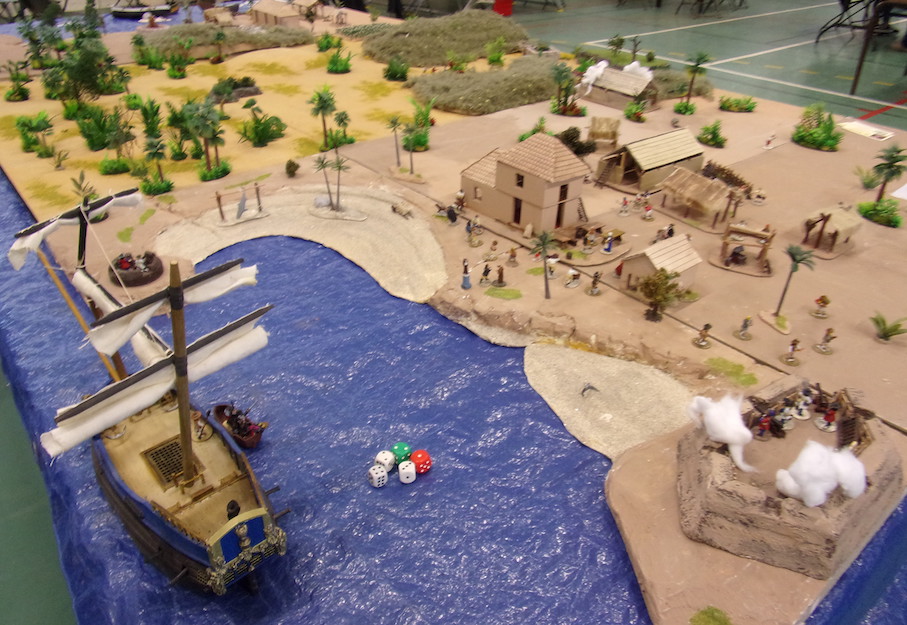 The French officer explains what he can about the situation, the Spanish listen to him and believe him ...but our pirates are already too far.

Good game and scenario.
Flexible enough to take lots more players I guess if they had turned up.
Looks and sounds like the ones you had a great time.
Were the non player roles predetermined at all or did you wing it according to how aggressive/well the real players were doing and to give them a good game?
It seemed to work well for player involvement. I've played in games where a rigid semi-solo game ended very quickly because of a badly thought through reaction table/npc flow chart.
Good looking table.

Sounds like a fun game. like a game of the TV series Black Sails.
De gustibus non est disputandum

(Um I didn't answer sooner because my phone line was cut by the wind four weeks ago... and only repaired today, this is Central Brittany).

Bronshtein wrote:Were the non player roles predetermined at all or did you wing it according to how aggressive/well the real players were doing and to give them a good game?
It seemed to work well for player involvement. I've played in games where a rigid semi-solo game ended very quickly because of a badly thought through reaction table/npc flow chart.

I usually predetermine the motivations of important NPCs before the game, then I play them all as logically as I can. My usual players can feel if a GM wings things too much and it hampers their immersion in the RPG dimension of the game. I try to feel my NPCs reactions almost as if I was a player, of course I know those opposed to the players will die, but the reactions of the other people in the village depended on what the pirates were doing. If necessary we roll a smiley die to decide the reactions of anonymous NPCs.

Good stuff.
Nice to hear from you again - glad it was only a phone line down.
Sounds like good way to do it-flexible within the story arc.
Keep safe hiding in Central Brittany.

Users browsing this forum: No registered users and 20 guests